ELCA/ELCT COVID-19 Update
On June 26, nearly 40 leaders from companion synod relationships across the United States and Tanzania gathered via Zoom to continue the discussion around the impacts of the coronavirus in Tanzania. What follows is an excerpt that contains observations from the ELCA’s regional representative in East Africa, Mr. Daudi Msseemmaa. A full summary of the meeting is available here and includes commentary from ELCA medical missionaries as well as representatives from other ELCA synods.

Daudi is the regional representative for the ELCA and lives in Arusha with his family. He shared a presentation focusing on COVID-19 in the context of the ELCT, the ELCA, and the other natural disasters facing Tanzania:

Daudi closed by reminding companions, "There is a natural resource that is in abundance in Tanzania. It's hope." He continues to remain hopeful in the ways this virus will strengthen our companionship.

The following letters were received from our friends in Tanzania:
​

Greetings from our family. Wema, Gerry, Happy, Judith and her son are doing well.

Thank you for the card and Easter greetings. Greetings and blessings to all the members of your church. I am still teaching at Pommern Secondary School. My son Gerry is in Form 1 at Pommern School, Happy in Standard 2 and Judith is doing some selling of clothing for kids to take care of her baby.

Thank you for the kindness you rendered to me when I used to come during my time with Global Volunteers.

May God bless you. Let us keep in touch.
Haran and family

***Haran is the teacher who partnered with Gerry Lidstrom through the Mwangaza program to begin our
Tanzanian partnership.
​An email from:  neleanyanguye@yahoo.com

It's a long time since I hear from you. For my side everything is going well. Always I give thanks to our Living God. How about you?

My sons are now in holiday time and we will travel to lringa. If God wishes we will send off Neema who lived with me for more than 10 years after her parents passed away. If God wishes she will be married on 29 June. I thank God for her. Please pray for her married life.

How is your church and everything in Wyoming?

Rev. Luyfagila is retired and is living at Kihorogota village near where you travel from lringa to Mtera. Please pass my greetings to everyone. Always I pray for you without forgetting your church and nation.

Your friend in Christ,
Nelea

**Nelea was the chair of the Mtera parish partnership committee during each of our visits.

With happiness from the Entire community as we received $1,000 from Global mission team. The construction will processed as you support us. The money has already deposited to our school account through BKB. May our Almighty God bless you for the support you made for the school.

We intend this week to buy some materials for construction of this multipurpose hall and will let you know the updates through pictures. Our whether is cold some how. Hope one day will meet each other.
Please receive greetings from Upendo and Couban with their kids.

Thank you again for the support. 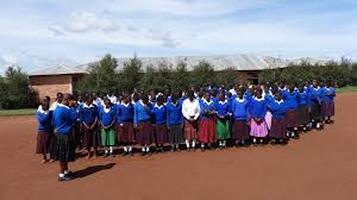 2000   Pastor Beebe received information about MWANGAZA, an educational partnership program between the Evangelical Lutheran Church in America and the Evangelical church in Tanzania.  He passed this information to Gerry Lidstrom, a member of St. Paul Lutheran and a junior high English teacher.

2001  Gerry Lidstrom becomes involved with the MWANGAZA program and is paired with Haran Ngede, headmaster at the Mtera Secondary School in Tanzania.

Summer 2001   Gerry Lidstrom goes to Tanzania to participate in seminars and training with Haran Ngede and MWANGAZA.

2001  St. Paul Lutheran joins the BEGA KWA BEGA program, a partnership between the St. Paul Area Synod and the Iringa Diocese in Tanzania.  We are partnered with the Mtera congregation.  The Tanzanian Task Force is formed to support and strengthen this relationship.

April 2004  Couban Letema comes as an exchange teacher through the MWANGAZA program.

February 2007  Pastor Jeff and Melissa Beebe, Marcia and Kirby Smith and Dave and Fran Nordhausen travel to Tanzania.  They assist in a food distribution at Izazi preaching point where there is famine due to drought and purchase and deliver bicycles for the evangelists using the funds our congregation sent in 2005 for this purpose.

October 2007  $5000 is sent to St. Paul Partners for drilling a well at the Chamsisili preaching point.

July 2010  Fran and Dave Nordhausen visited Mtera Parish and Secondary School while on a “Discovery Safari” with a group from an organization called Godparents for Tanzania.

2011  The name of the working group was changed from “The Tanzanian Task Force” to the “Global Ministry Team”.

May 2011  A sending service was held for our cluster leader, Rev. Tom Nielsen, before he left for Tanzania.

May 2012  Dr. Faires Ilomo, professor at Tumaini University and a visiting professor at Luther Seminary, was a guest preacher.

2013  Team members attended events and meetings sponsored by SPAS and BKB affiliates to reorganize the Bega Kwa Bega partnership under the new coordinator, Rev. Pater Harrits.  A $500 annual commitment for three years was made to Radio Furaha for agricultural programing.

February 2014  Jennifer Cockburn led a trip consisting of her husband, Tom, Pr. Patterson, Kathie Marabella, Fran Nordhausen and Pr. Jan Mehlhoff to Tanzania to visit our partner’s congregation in Mtera and the students we support at Mtera Secondary School.  With the help of Haran Ngede and his daughter, Judith, we purchased science textbooks and visited many of the BKB affiliates in and around Iringa.

2014  Working with H2O for Life and Wyoming Elementary School, we contributed approximately $3000 to St. Paul Partners Water Development Project for the upgrade of the water system at Mtera Secondary School.

2015   The congregation committed to a separate partnership with Migoli parish, formerly a preaching point of Mtera parish and now an independent parish.   Jim and Betty Wolf presented a video of the celebration marking the completion of the water project at Mtera Secondary School at our annual Tanzanian Sunday service.

2016-2017-2018   It may appear that our small but mighty team has not accomplished much in the past three years.  But contrary to what you may be thinking we have touched many souls, not only in the  two partnership congregations  we have in Tanzania, but even here right at home in St Paul Lutheran. The two congregations that we partner with are Migoli partnered in 2001 and Mtera which we added in 2015.  St Paul Lutheran helps them both monetarily and our team helps them out with funds for some of their specialty needs.  For instance, in 2018 we bought each congregation a "biki-biki", (more commonly known to us in Minnesota as motorbikes).  Prior to having the biki-biki's the pastors would have to walk to their "outpost" preaching points.  It would take a day to walk to the preaching point and an additional day to walk back to the home church.  Now they can make the trip in one day! If you are wondering what Preaching Points are, they are small groups of Christians that live out and away from any villages or towns.  African ministers from the larger congregations go out as missionaries to these small churches.  Mtera was once a "Preaching point" of our partner congregation Migoli.

Our Global Missions Team also helped monetarily when a storm went through the Mtera region and damaged the roof of the school.  The funds were used for supplies to repair the damages.  We are also in the process of accumulating funds to help build a new church building in Mtera.

How do we get money to fund these endeavors?

Tanzanian Sunday.  This special service is put together by the Global Missions Team in the Fall of each year to celebrate our union with "our churches"  in Tanzania.  We collect a special offering on that Sunday that goes directly to the Tanzanian Fund.

Creation Vacations.  What is that, you ask?  It is a time when local crafters" get together on a weekend to work on their crafts and enjoy each other's company.  A lot of laughing, chatting and camaraderie goes on in the two days that our guests are together.  Did we mention EATING? Our group provides all the meals, desserts, drinks and snacks for the Creation Vacation.  Our crafters are treated royally and enjoy the time they have together.  We've had as many as 40 guests and many of them are repeat customers.  Check St. Paul Lutheran's calendar, another Creation Vacation will be coming up early in 2020.